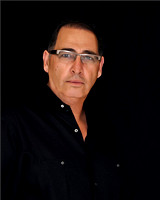 Born in Morocco, raised in Israel, and eventually studying photography in Denmark, Azoulay is one of the industries most internationally recognized fashion photographers, shooting celebrated campaigns for major advertising agencies and working for renowned publications like Vogue, Glamour, Harpers Bazaar.

Azoulay's comprehensive photographic portfolio exhibits a meticulously curated collection of images that captures the wondrous detail and hypnotizing intimacies that often go unrecognized; his series surrounding Hong Kong, the unseen trails of Burma, and the Americana Series: 10,000 Miles to Nowhere, are only a few of the conceptual concatenations that address such elements.

Upon relocating to Miami in the 1980’s, Azoulay has become one of the most active and influential members in its arts community. In the early 1990’s, Azoulay opened the Daniel Azoulay Gallery in Miami’s Design District to promote contemporary photographic work from both emerging and established artists. He also continues to work closely with the academic arts community in Miami, lecturing, conducting portfolio reviews, and sponsoring photography scholarships at various universities.

Much like the city he now calls home, Azoulay's photographic career has gone through several metamorphoses with picture taking being the steadfast part of his professional DNA; from studies in photography to prolific fashion shoots, his hand always clutching the camera.

Currently, Azoulay finally began documenting what he has always dreamed of from the very beginning. Architecture and design have held a magic spell over the photographer and so does the magic city that kept Azoulay busy with endless opportunities to focus his lens on its ever-changing skyline such as the development of Perez Art Museum, Frost Museum of Science, and PortMiami Tunnel Project, Brickell City Center, Adrienne Arsht Center, Connecting Miami.

Azoulay documents architecture with extravagant detail, transmitting the architectural beauty while focusing on form, light, and creative compositions that reveal unique angles and perspective.  Much of his current work is also based in his philanthropic approach; proceeds from his books are donated toward scholarships and programs that support young talent.